Measuring the Benefits of the MICE Industry: a Hong Kong Perspective

The Global MICE Industry is Growing

The Meetings, Incentives, Conventions and Exhibitions (MICE) industry is an important segment of the tourism industry, and is a growing sector with great potential. The MICE industry comprises of the upper-stream (such as MICE activity organizers), midstream (such as accommodation, facilities and services suppliers) and downstream (such as adverting agencies, logistics services providers and travel agencies) industries. Therefore, the MICE industry involves a wide range of sectors such as tourism, hotels, transportation, catering, real estate and retail. A successful MICE industry is believed to have significant positive impact on a country’s economy. Apart from bringing significant economic benefits, such as national income and job opportunities, it also benefits a destination by providing opportunities for knowledge sharing, country brand development and network building.

It has been observed that the global demand for the MICE industry has recorded fast growth since 2009 (World Travel Monitor, IPK International). This growth has been faster than for traditional business travel. Momentum was maintained during Jan-Aug of 2013 as the MICE sector grew by 6% while traditional business travel shrank by 10%. The MICE sector currently shares 54% of the total business travel market.For example, according to the statistics of the International Congress and Convention Association (ICCA), the number of association meetings has been increasing during the past 5 decades. Growth was more significant after 1997, during the periods of 1998-2002 and 2003-2007, growth rates over the previous period were 51.4% and 59.9% respectively. 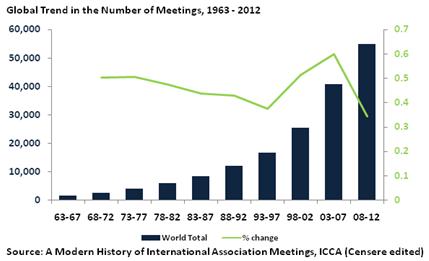 As a result of more convenient transportation and a higher degree of globalization, the Asia Pacific Region has become a more important destination for MICE activities. This observation could be illustrated by the changes in the association meetings segment. In the past 50 years, Europe was the leading region in holding association meetings. Even though its market share has been shrinking since the 1963-67 period, it still held more than half (54%) of the market share in the period of 2008-12. In contrast to Europe, Asia and the Middle East saw gradual increases in market share over the past 50 years, increasing from 8.2% in 1963-67 to 18.2% in 2008-12. Asia and the Middle East now share the second largest portion of the market. In 2012, there were 11,156 association meetings held globally. Of these meetings, 6,036 were held in Europe and 2,180 and 177 were held in the Asia Pacific region and the Middle East respectively. 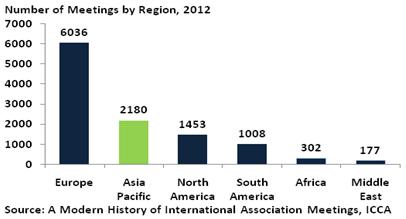 MICE Tourism imposes multiplier effects on the economy through various types of spending, namely direct spending, indirect spending and induced spending. Professor Larry Dwyer, President of the International Association for Tourism Economics, pointed out that direct spending effects can be measured in the industries which are regarded as “direct beneficiaries” of relevant activities such as the hotel industry. Direct spending is purchases of goods and services directly attributable to MCIE activities, such as MICE visitors’ spending on hotels. Indirect spending occurs with other industries that provide goods and services to the direct beneficiaries, such as industries supplying products and services to hotels. Induced spending refers to household spending of income earned either directly or indirectly related to MICE activities. Moreover, MICE tourism could absorb more income than other types of tourism because business travellers usually spend more for better hotel and dining services.

During the period from 2008 to 2012, the number of overnight MICE visitor arrivals in Hong Kong has increased by 37.6% to from 1.17 million to 1.61 million.On average, MICE visitors spend more money than other overnight visitors. In 2011, the spending per capita of general overnight visitors and MICE visitors were HKD7,470 (USD959.7) and HKD9,187 (USD1,180.3) respectively, a difference of 23%.From a macro point of view, we can get a picture of the direct economic effects of MICE activities by examining the survey results of Hong Kong Exhibition and Convention Industry Association. 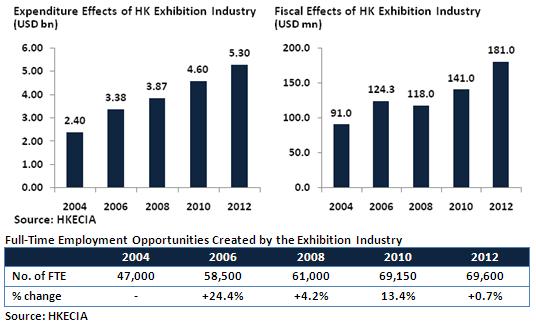